Love it or Hate it!

I started making these little Harris Tweed soft-filled houses earlier this year. I had high hopes of making a whole street of them! I loved using the earthy shades of tweed which was quite a departure for me, and thought the sharp contrast of the black and white felt embellishments worked well. 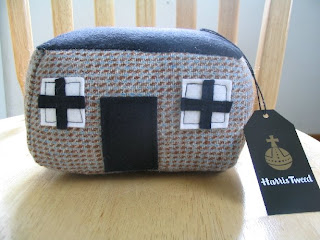 When I photographed them in a little group like this, they reminded me of the houses of Main Street on St Kilda, which is a remote group of islands off the West Coast of the Outer Hebrides. No longer inhabitated by the original population, St Kilda holds a real fascination. 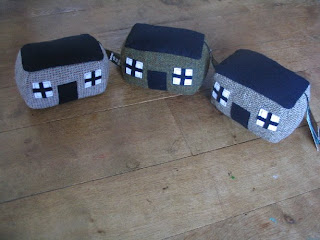 I didn't subconsciously set out to make these houses in any particular way, they just 'emerged'. I think this is a common occurrence amongst crafters, whereby creations tend to evolve and somehow magically 'work'. However, my other half can't see any beauty or merit in this particular design, and the reaction has been mixed from other folk too - but I love them! The 'naive', simplistic design isn't to everyone's taste. I know you have to listen to other's opinions and take them into consideration, but sometimes I think you have to stick with it regardless!
On a similar theme I designed a 'wee hoose' collage card which is still a bit of a prototype. I thought it might make a fun 'new home' card, but it hasn't made it into my shop yet! I enjoyed making it but like many things it may remain as a wee bit of experimentation and go no further. 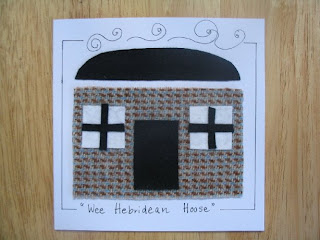 If you've ever visited St Kilda and these houses bear absolutely no resemblance, I apologise! I've recently started to add a sprinkling of lavender inside the stuffing to give them a delicate fragrance. I quite like the woolly smell of Harris Tweed myself!

Have you ever made, designed, a piece of work and others didn't quite "see it"? I'd love to hear your experiences. Did you stick with it? Love it or hate it?

You can read more about St Kilda here.

I have taken one step further with my Etsy endeavours and added a link to my Etsy Shop. Yes, I know - there's nothing in it! But this is a step nearer ... these things take time! (We're on Hebridean time, don't you know!) If anyone has any tips, comments, observations re Etsy trading before I take the plunge, they would be very welcome! Should I just jump?
Posted by Tweed Thoughts at 12:58 2 comments: 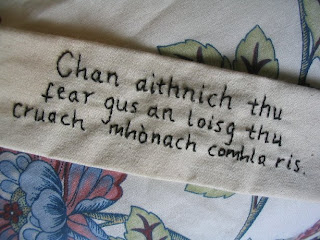 Another case of two posts in one day! Don't hold your breath - it usually means I haven't blogged for a month! When I rediscovered my 'crafty' inclinations a couple of years ago (this co-incided with my youngest child starting school), I became interested in using proverbs (Gaelic ones in particular) in my work. I intended to use them possibly as part of a cushion cover, wallhanging or similar - however I took a completely different direction and decided to make Harris Tweed dinosaurs instead! Anyway, during the summer tidy up of my work area, I came across my humble (and rather crude) first attempts at embroidering text.

I took out a book on Gaelic proverbs/sayings from the local library as reference. This one made me laugh, which I guess is why I used it. Roughly translated, it means "You don't know someone until you've shared/burned a peat stack with them". Peat was the traditional fuel in the islands until a few years ago. Every house had a peat stack beside the home and ours was no exception. I think the proverb makes reference to a married couple, (a peat stack would last for up to a year) - suggesting you don't know someone until you've lived with them in close domestic proximity for some time). I might be wrong!! but that's my interpretation. 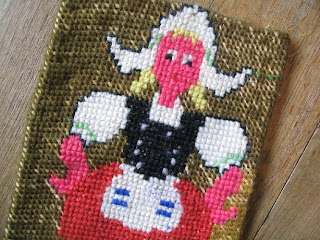 I came across this work of art (Ha! Ha!) which I created in my primary school - must have been aged 9 or 10. It made me laugh when I came across it and I had a very strong memory of the feeling of dissapointment when I had finished the project. I realised the buttons on my cross-stitch piece were out of alignment - what a dissa! I was quite surprised at how clear the recollection I had of making the piece was - quite weird, but I must have toiled over it and was possibly my first completed needlework project. Funnily enough, I've done very little cross-stitch since!
Have you any memories, pics of your early creations? (P.S. Yes, I know her face is bright pink! - the school budget can't have allowed for the inclusion of 'flesh-tone' shades!)
Posted by Tweed Thoughts at 21:46 1 comment:

Tweed Thoughts
Welcome to my crafty-blog from the Isle of Lewis, in the Outer Hebrides of Scotland, where I was born and raised. It's a lovely place to be :) Brought up in a Gaelic speaking household, 'Art School drop-out' from way back when . . with a passion for fabric and yarn:) Thankyou for stopping by :) I hope you enjoy my crafty updates and musings . . . Alison x

Handmade on the Croft (Etsy) 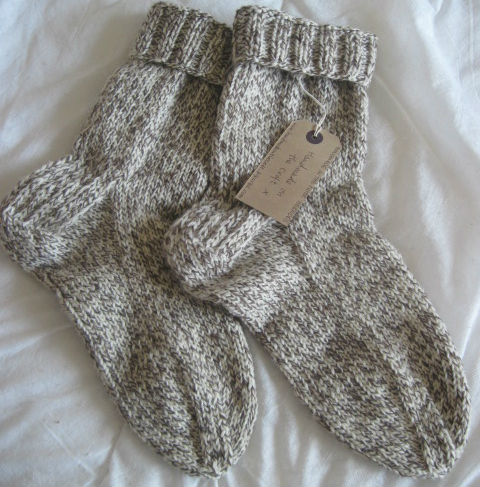 Sewing
I work predominantly with Harris Tweed, intermingled with any other pretty fabrics I happen to come across.
Knitting, Crochet and everything else!
I also love to dabble in embroidery, crochet, knitting, handsewing . . . .
Traditional Crafts - I love to knit socks!
I'm a 'crafty-nut' basically with a particular passion for domestic, traditional crafts (as well as making 'tweedie' stuff of course!) :)

Please respect my original work and do not use any of my images without prior consent
Thankyou :)